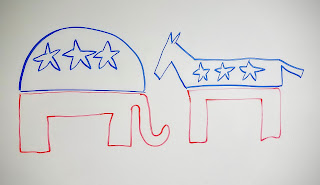 I was planning on using this post to start tying together my philosophy and my political views into a cohesive thought. However the current political environment has so burned me out and frustrated me, I do not believe I could do justice to that original idea. Instead I will discuss some of what is going on now and what I think about it.
This political season has been one of the worst I can remember. There has been more "mud slinging" and insults in this campaign than in any in recent memory. But who, ultimately, is to blame for that. I believe it's the American public who is at fault.

Yes, the candidates are constantly telling us how bad the other is. Mr. Trump calling Mrs. Clinton a crook, and Mrs. Clinton calling Mr. Trump "temperamentally unfit". These are what make headlines, what fills our news broadcasts. Why? well, because news programs, news papers, and websites like viewers and ratings... These stories get great rating. If people stopped watching these outbursts I guarantee the news would stop Broadcasting them.

I believe that if the American public stopped watching these political tantrums, and the news agencies stopped broadcasting them, the candidates would stop having them. The free media would be over and then they might actually have to talk about the issues, the problems this country faces and their proposed solutions for them.

I have never wanted to hear why someone else is the wrong person for the job, but rather why the candidate I am listening to is the right person. I can probably list the last 10 insults slung from either side in this presidential election but I would be unable to tell you more than one positive solution either candidate has posed. There is so much wrong with that I shouldn't even have to elaborate on it.

I have not followed this election with the care that I usually do. I was more interested during the primaries, but now that my choices are between eventual nuclear destruction and crime or corruption I just can't make myself care. I genuinely feel that no matter who wins this election we are going to be far worse off 4 years from now than we are now.

I want to be excited about it. The presidential elections are my favorite. I usually watch all the debates from the primaries on, read all I can about the platforms, and follow the candidates proposals if not with excitement at least with interest. This year I can't bring myself to watch the news coverage.

I am going to spend the next week forcing myself to listen to the candidates. To try and pull some actual policy out of what they say. I hope I can put together enough information to have an actual political post, I am not, however, holding my breath.