Religion and Politics Part 3 - Taoism (and a Bear) 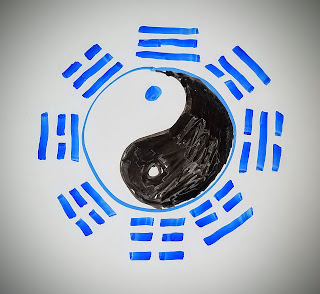 In my {previous post} I talked about how I found Taoism and some of the humble beginnings of learning the Way. In this series I would like to spend some time looking at why Taoism resonates with me and why over all others I follow Taoism teachings.

I do not want this post to become a lecture on Taoism, but some of the more basic readings and information have to slip in or I can't truly explain what does it for me. I will try to keep the textbook stuff to a minimum, though I make no guarantees.

The differences between the most well known eastern philosophies can best be spelled out with a quick discussion of the allegorical painting The Vinegar Tasters. Now normally I hate allegory, but in this one limited way, it is both necessary and helpful. Basically the story goes the three masters were gathered around a vat of vinegar. Confucius had a sour look on his face, as he believed that the present was out of sync with the past and was sour. Buddha had a bitter look on his face, believing life on earth to be bitter, full of attachments and desires that led to suffering.Lao-tse on the other hand, had a smile on his face, as the vinegar tasted exactly as it should, believing as he did that only by working in harmony with life's circumstances can you change what others see as negative into something positive.* This was probably the first thought that made me stop and really consider Taoism. Instead of fighting everything all the time work with it.


The Tao (Literally The Way or The Path) means many things to many people,  as I read and understand it - flawed though my interpretation might be - is about finding the natural order, the guiding principle, the path everything takes. Sounds easy right? I think this quote from Taoism 101 says it best; “The path of understanding Taoism is simply accepting yourself. Live life and discover who you are. Your nature is ever changing and is always the same. Don’t try to resolve the various contradictions in life, instead learn acceptance of your nature”


There are Taoist principles I disagree with, such as "The learned are not wise and the wise are not learned."* You can be both, but you can't let learning stand in the way of understanding. Breaking from Tao for a minute and quoting Jasnah (The Way of Kings) "A true scholar must not close her mind on any topic, no matter how certain she may feel."  I think as long as you keep an open mind on all subjects including those of the Tao you can be both learned and wise. Essentially though I believe that this principle is meant to make sure you seek insight and understanding - wisdom - and not just intelligence and logic.

At its most basic, the Tao, or the Way, is about aligning yourself with the natural way the world, the universe works. Taoism is about letting things be what they are. Everything has its own place and function. Another example taken from The Tao of Pooh is that of the crooked and tough tree. The crooked and tough tree may be useless to you and have no value as lumber, a tree no craftsman would look twice at it, however that is not what this tree is for. You can use its shade, rest under its sheltering branches, admire its character. It is only useless to you because you want to make it into something it is not and do not use it in the proper way.


Discovering what place and to what function things have, then allowing them to be those things, is a very important lesson. As I wrote above about The Vinegar Tasters is also true with the crooked and tough tree if you let everything be what it is and not try to fit it into your idea of what it should be you will find a lot less stress and unhappiness in your life.


That lesson, more than any other, is the one that guides my life. I try to always let trees be trees, people be people, and vinegar be vinegar. It isn't always easy nor possible. I do have children to raise and while letting them find their own way is important, sometimes you have to point them in the right direction and perhaps make them be a little better person than they would naturally be. My own children aside though, who am I to make a decision on what a person should be?


You can take this same principle and apply it to yourself (and in fact you should), which is admittedly much harder. "When you know and respect your own inner nature you know where you belong, you also know where you do not belong."*  You hear it all the time; "Be true to yourself", "Find Yourself," sure, that isn't Taoism, but you really do need to be true to your own inner nature. You have to discover what that nature is, and not force yourself to be something you are not. "The wise know their limitations, the foolish do not."*  Back to The Tao of Pooh for a quick reference again, from "Cottleston Pie"  - "A fly can't bird, but a bird can fly."


This is not to say you can't have goals: that you can't reach for success. It just means you need to align yourself with the Way and follow the natural order to achieve them. When you are working out of alignment with the Way, you will be stressed, fatigued, and unhappy. Only when aligned with the Way do these disappear. Knowing your inner nature and following it is the only way to be both successful and happy.


I always try to keep my inner nature aligned with the Way, I try not to force things to be what they are not. I try not to force people to be what they are not (beyond behaving in a lawful and civilized manner). Though I was not always like this - boy was I not -  I was always trying to bend everything to how I thought it should be. I was also angry all the time without really knowing why. It took a simple bear of very little brain to show me the way (the Way) and I never want to go back. Do I still slip? Do I still try to make things go the way I want them to? Of course, no one, especially myself, is perfect. When I slip and try to change the nature of things, it always turns out badly, and I end up feeling worse for the effort which, of course, is what reminds me that I need to re-align with the Way.


In my next post I will continue looking at Taoism and why it works for me.

* Quotes from various texts about Taoism including The Tao of Pooh, Tao Te Ching, and others.

** Although written in my own words, the ideas are not mine originally, and can be found both in The Tao of Pooh as well as any other text describing the painting and its allegory.