Religion and Politics Part 4 - Taoism (and a Bear) 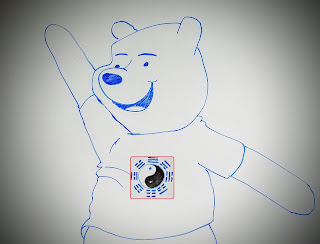 I continue to look at Taoism and how it has changed me, and the life I live. This week we will look at the Taoist principles of non-contention, non-action, and non-intention.

I have been accused many times of avoiding conflict and I know it is meant as a bad thing but to me it is a compliment. One of the most important principles of Tao is that of non-contention. Without fail violence and conflict cause larger problems and peaceful solutions should always be sought. Conflict for the sake of conflict is a waste of time and energy, causes tension, and takes you off of the path to the Way. I will admit I do not like conflict but I think we should look very carefully at someone who does like conflict. Do we really have to debate the fact that living without conflict is better than living with it?


Next is the principle of Wu Wei, or non-action. I know this sounds like a lesson in lazy, but it isn’t. This has been more accurately described as the “action of non-action” (Elizabeth Reninger) This concept is to so perfectly align yourself with the Way, with the flow, that without effort you can respond to whatever arises. This is one place I could use some work, I try and try, which I believe is most of the problem, but I just can’t quite find the flow. I always seem to end up having to act rather than spontaneously meeting situations. When you find that fit, ride the ebb and flow perfectly and things just work. It’s like hitting the perfect golf shot or how I have heard it described anyway since I don’t golf.  Everything just resonates perfectly. I think this is something everyone can relate to because even if you do not follow the Way, a situation occasionally comes along that naturally resonates with you and your path, I know you have experienced it.

“When nothing is done, Nothing is left undone” (Chapter 48, Tao Te Ching) Take action only when action is needed and do no more than that action. Things will usually work themselves out, if allowed, and action is often unnecessary and tends to cause the conflict we are trying to avoid. When I find myself trying to make things happen rather than allowing them to happen naturally there is tension, conflict, and often things do not go the way I would like. I almost always find it easier to let things happen and keep myself following the flow.

Non-intention is considerably easier for me as it feels more natural. It is one of the beliefs I had before finding Taoism that made it a better match for me. Some people do for others - do anything for that matter - for the praise or the recognition. That is intention. Non-intention therefore is the virtue of doing for the sake of doing.

“The Sage is occupied with the unspokenand acts without effort.Teaching without verbosity,producing without possessing,creating without regard to result,claiming nothing, the Sage has nothing to lose.”
(Chapter 2, Tao Te Ching)

I have long believed that doing something (anything) should be it’s own reward. If no one else ever knows of something I did, it still got done and those who benefited from it get that benefit regardless if they know it was me or not.

By now it is (or should be) becoming clear how Taoist principles interrelate, support and follow each other, and help make life better. This is my understanding of the Way. You will have to find your own. The Tao cannot be defined, it is indefinable. Once you find the Way and begin riding the flow you will understand the Tao.

“Cleverness, as usual, takes all the credit it possibly can. But it is not the Clever Mind that's responsible when things work out. It's the mind that sees what's in front of it, and follows the nature of things.” (“The Pooh Way”, The Tao of Pooh)

Though this quote really relates more to Wu Wei than to non-intention, I think it’s a fitting way to close this post. It really sums up what it means to follow the Way. I know I have only begun to scratch the surface of Taoism. I could write 100 posts and still not touch on everything. I have accomplished what I set out to, and I have firmed up my thoughts, my beliefs and reavowed my commitment to follow the Way.

I may return to Taoism from time to time, a post here or there, as I continue to study and follow the Tao. For now though it is time to move on and start taking a look at politics and see if we can make everyone else I haven’t already offended really angry.