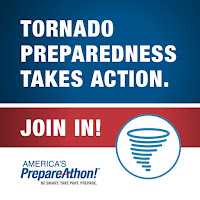 There are a few things that I wanted to put down on digital paper this week. None of them are long enough for a post on their own but they are on my mind so I wanted to toss them all together and see what happens.

Though I am not a prepper ('I am a pepper, wouldn't you like to be a pepper too'?*) I was a Boy Scout and I believe in being prepared. To that purpose I am subscribed to FEMA's alerts and informational lists. Every once in a while they send information about events like the PrepareAthon happening on April 30th. (http://ready.gov/prepare).

FEMA offers a ton of information on how to prepare for the kind of things that might actually happen to you and your family. They did, though I don't know if it is still active, have a "Zombie Apocalypse Outbreak Alert" that you could subscribe to. Of course, this was a funny way to get people interested in being prepared since most of the preparations for a zombie apocalypse align quite nicely with most other natural disasters. Take some time and make sure that you and your family are prepared for the tornadoes, power failure, snow storms, and other real world disasters that could happen any time. This is especially important during the season changes like we are experiencing now in Michigan when tornadoes are, if not common, more likely to occur. 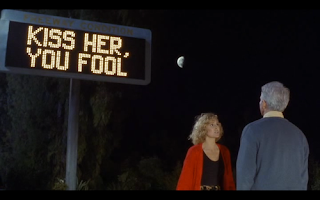 I was driving down interstate 696 the other day (actually a week ago or so now,) when I noticed the digital information sign on the side of the freeway. It was lit up with the catchy slogan "Ice and Snow, Take it Slow".

I was immediately reminded of the movie L.A. Story ** starring Steve Martin and Victoria Tennant. I hadn't seen this movie in probably 15 years or more but seeing this rather stupid slogan on our sign brought it back instantly and I had to pull out the DVD and watch it again.

A road side sign much like the one on I696 was used to move the plot and Steve Martins character along throughout the entire movie. If you have never seen it or at least not for a long time take a couple hours and watch it again. For a romantic comedy it's a pretty good movie and has more than a few good laughs. Though you can't currently stream it anywhere I can find, it is available for purchase on iTunes or Google Play ($9.99) and for rental on youtube. It is worth the rental fee, though I am sure you can purchase the DVD somewhere for less than the 9.99 fee on iTunes and Google Play. 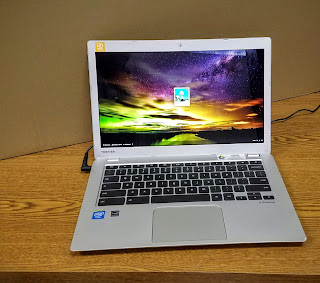 I conducted an experiment where I tried to use my Chromebook for everything so I could leave my laptop at home more often.

My laptop, while very nice, is really heavy. It's a 15.6 inch Acer V15 Nitro Black Edition. It is a Quad-core i7 with 16GB ram, dual hard disks (ssd and hd) and is a potent performer. However it weights a fair bit (easily two or three times the Chromebook) and only has about an hour and forty-five minute battery life.

My Chromebook on the other hand (a 13.3 inch Toshiba Chromebook 2) is considerably lighter, and boasts a real life 9 hour battery life. The Chromebook is capable of doing 99% of the things I want and everything I need to do. The other 1% is gaming and Windows Only apps that are not remote desktop compatible.

The problem I have is, that while it is capable of doing it all most of it is tedious. Most of the more complicated work, editing photos, editing video, etc, takes more time and effort than on a windows PC. I suppose this would be less so if I made a commitment to ChromeOS and moved all of my data and photos to Google Drive. I just don't think I (or Drive) are quite mature enough for that. So I suppose I will continue to use the laptop for most things and only bring on the Chromebook when I am going to be working somewhere that a long battery life is more important than speed of work. A Coffee shop for example, where outlets are scarce. 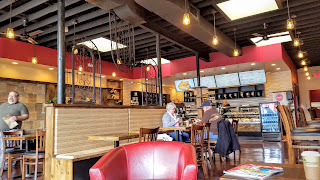 Speaking of coffee shops, I have discovered a new one, Eos Coffee Shop on Jefferson in St. Clair Shores. They just had their grand opening a couple of weeks ago and a friend and I decided to give it a try. The grand opening weekend was fun the entire menu was 50% off and you could sample coffees. We sat there for hours trying different coffee and espresso drinks and sampling the available food.

The decor is very nice, neither overly feminine nor masculine, with a lot of wood, iron, and brick. There are high top tables, booths, couches, and chairs and enough outlets for almost everyone to plug in a laptop or phone charger. It would be nicer if these were built into the tables or at least higher on the walls (I hate crawling under a table to plug something in.)

This brings me to the important part the Coffee. I have now tried many different coffees, espressos and a tea (chai) and they all taste great. The coffee comes in a recycled paper cup with recycled paper sleeves which is fine, except they have no recycling in the shop, everything goes into the trash. The food is good enough, for a coffee shop, with the Eos breakfast sandwich being probably the best choice. There are a few pies, cakes, muffins, bagels, and danish. None of the food seems to be made in house, but I wouldn't expect that from a coffee shop.

The only real problem I see is that the prices are quite high. A lot of people, including me, use the Starbucks scale for coffee costs. Don't get me wrong there are a lot of people who do not like Starbucks coffee for various reasons, but most agree that Starbucks is about top of scale for what can be charged for filtering hot water through ground up beans and still be able to look at yourself in the mirror.

In this test, Eos comes up short. Plain brewed coffee prices are comparable to Starbucks. Even the specialty drinks and espresso/latte drinks are just a little cheaper, but when you want to start customizing your coffee things get out of hand fast. On one order (a plain latte) I was asked if I wanted a flavor, normally I don't but this time I went for it. I was shocked to see my bill $.90 higher. When I asked about this I was told it was $.29 per pump of flavor.

Starbucks only charges once for flavors from the same bottle type. It's a bit complicated, but to simplify a bit, if I wanted 15 pumps of vanilla flavoring and 3 pumps of caramel it would still only be .50. To make it worse I was not asked how many pumps I wanted, nor was there any communication between the cashier and the barista as to how many I had paid for. All in all though it is a nice place, with good coffee, and a comfortable environment. You should check it out. Just don't get flavoring added to your coffee.


* Be A Pepper - Dr. Pepper advertising campaign from the 70's