The Emotion of Emotion 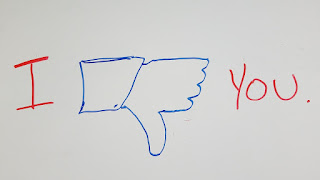 The other day I was talking with someone and we turned to the subject of people. Wait...no... people that carry drama and chaos with them everywhere they go. I am sure you know the type of which I write.


I had to explain the way I view 'life, the universe and everything'.* The first thing I talked about is the fact that I don't hate anyone, I really don't. I dislike some people, but the way I see it, dislike is a lack of emotion, literally meaning to not like. The reason I think this way is that in order to hate someone, you have to feel very strongly about that person. Hate is a strong emotion and is full of passion and heat. I do not want to give someone that much control over myself and my emotions when the feelings are negative.

When you hate someone, I believe you give that person the power, the ability, to affect the course of your life. Things that that person says or does will then change you for the worse, the effect being you have a worse day, or at the least experience a negative shift in mood that otherwise wouldn't be there. These people, these cancers in your life can not be allowed that kind of power. You suffer for this, not them.

In my philosophy, I do not allow those negative emotions to fester. By simply not liking someone I take the power away from them and return it to myself. Their actions no longer have the power to change my mood or my day in the least. I do not have strong enough emotions about these people to care one way or another what they say or do.

I can most easily express this idea with a comparison to tragedy. Recently there were earthquakes in both Japan and Ecuador. These disasters are real, and terrible, and there was great loss of life and injury. I feel bad about this, but it was half way around the world and I didn't personally know anyone involved so there is a detachment, an unreal quality to it. Like it was a movie or a book and not reality. On the other hand recently a friend of mine's father passed away. While I didn't know his father very well, and it was one person, I still felt more sadness over this loss than the hundreds halfway around the world. This is how I feel about those that I dislike. It isn't a perfect analogy I admit because I do feel worse about the victims of the earthquakes than I do about those I dislike, but I think it gets the general meaning across.

There are those who can't believe that I actually live this way, those that have not found the freedom that comes from living this way. I know a lot of people who have to rail against those that seek to disrupt and annoy. They have such anger and hatred in their hearts that even thinking about the energy and time spent being angry and fighting back against someone who lives for exactly that exhausts me . It's like the old newspaper adage; "Never pick a fight with a man who buys ink by the barrel" Only this would be a tanker not a barrel.

I really can't say that one philosophy is better than the other, I only know what works for me. I look at people that let the hatred and anger remain, those that fight back and I have to say, I think I am a lot happier a lot more of the time than they are. I am not talking about simply avoiding it, or ignoring it, but actually not investing the energy or emotion into people who are not worth it. Certainly I seek to avoid arguing and fighting, I do not go looking for fights, I have enough that come looking for me. But it isn't about avoiding conflict or disagreement, but more about making sure that when you do have to fight it is about something that is worth fighting.

* 'The answer to the question of life, the universe, and everything is 42'. For an explanation please see "The Hitchhikers Guide to the Galaxy" by Douglas Adams.