Short Fiction, the Internet, and Everything. 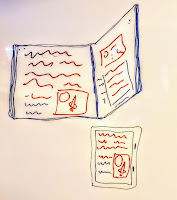 I have been reading what you would call short fiction since I was very young (is there anything that more epitomizes short fiction than a Little Golden Book?)  and I was probably 9 or 10 years old when I got my first magazine. I am reasonably sure it was a copy of Asimov's Science Fiction magazine; I still have a couple issues from back then, though not all of the ones I read by any means.

To have lived through some of the heyday of fantasy and sci-fi short fiction and the magazine boom only to then to see it falter, almost disappear completely, and then start to recover was an interesting experience.

I was messaging back and forth recently with the editor of one of the speculative fiction magazines I read. I was asking him if I could get non-kindle versions of the subscription I had though my Amazon Kindle account (this will be a completely different post) which, for the record, he did.

One of the things we talked about was the near death of the short fiction magazines and I think we can all agree that this would have been a bad thing. You don't have to read them to know that without them there are a lot of authors who might never have gotten published. If you do read them then you also know there are a lot of great stories out there that would be very hard to find without these magazines.

I am old school when it comes to magazines. I love paper magazines, the whole experience is wonderful. I love opening the mail box and seeing the new issue in there. I love opening the magazine for the first time and leafing through it and seeing what catches my eye. I even love the adverts they like a time capsule waiting to rediscovered when you go back to the magazine 10 year later.

I don't keep every magazine I have ever read but the ones I do mean a lot to me. I still have some early (for me) sci-fi and fantasy magazines, I have years of Antic, Popular Communications, NOVA, Monitoring Times, QST (So many years of QST), Popular Science, and more than a few titles of photography magazines. All of them are cherished and I go back to them often. With the exception of most of my Atari computer magazines (like Antic and STart) because someone (probably a lot of someones) went to the bother of digitizing them all (adverts and everything) which makes it easier, and somewhat safer for the magazine, to go to those digitally for normal research. Though I do still pull out the physical magazines from time to time for the experience of it.

That all being said. I read most of the magazines I currently subscribe to digitally. It is generally, though not always, cheaper to buy them digitally than it is in paper. Some are only available digitally, while others are a hybrid but charge the same for paper or digital subscriptions.

The industry had to do something though. There were a lot of titles, maybe too many and, according to this editor, the big short fiction magazines were bleeding subscribers and the smaller ones just folding. As with anything that the internet can replace for free (short fiction for example) The industries being left behind have to adapt or die. A few pioneers in the online digital magazine industry (like this editor I was talking with) found a way to make it work. They are not necessarily burning a fiery trail though the publishing sky with profits and sales but they are managing to stay in business, pay those involved, (editors, shlush readers, authors, etc) and just keep flying; I mean publishing.

I noticed myself, though certainly from the outside of the industry looking in, that there had been a decline in magazines on the shelves. Most of the really big magazines kept going but a lot of the smaller niche magazines disappeared and a lot of the ones I kept reading (Asimov's, F&SF, Ellery Queen, etc) changed a bit.

According to the editor I was talking to, the industry still isn't in a good place, though it is in a better place than it was. A magazine can now at least pay for itself and maybe make a profit as well. This has created a new problem for the industry, one that I like to call the pita problem. (others call it the video store problem, or the froyo problem) Now that it has been proven that magazines can survive in a digital world everyone and their uncle thinks they can run an online/digital magazine.

I subscribe to a couple of magazines on Patreon and every once in a while I search for the term magazine to see if I can find another I might like. The listings for magazines on Patreon is incredible. There are so many it would take hours to just peruse the listings let alone go to each one and see if it's worth supporting. This is crazy, it's like all of the above examples, a pita restaurant, a video rental store, or a froyo shop on every corner each trying to survive on the 10 or 12 customers that live closer to them than the one on the next block. There are only
so many readers and trying to spread them that thin is probably going to cause problems for the industry again.

The internet is a powerful tool. Information, free (mostly) and easy to find. It has destroyed, reshaped, and caused chaos in more industries than you can shake a stick at. The magazine publishing industry is one of those affected and it's good to see it recovering because I for one would miss having them to read and enjoy every month.

I guess this is a very long way of saying that even if you get your literary entertainment for free somehow on the internet. You should still support the authors, publishers, and magazines that, in this digital age, filter through the noise of every person who can complete a sentence and thereby considers themselves an author. (myself included) Who then select those true gems of new, exciting, and entertaining fiction, secure the rights, edit it, and make it available for everyone to enjoy instead of just the lucky few who might have found the authors website on their own. You know it's the right thing to do. ;)

This is a list of a few of the magazines that I subscribe to and support and that I think you should check them out if you like short fiction, heck even if you don't like it, check them out anyway, you might find a new appreciation for it.

Clarkesworld Magazine - I support this magazine on Patreon and is my current favorite.

The Magazine of Fantasy and Science Fiction (F&SF) - A great magazine from way back. I subscribe on Weightless Books

Uncanny Magazine - A new magazine I just started reading and I support them on Patreon.

There are other magazines I would love to read and support however their digital model is not one I will put up with. Either I am locked into an app like Zineo or I am locked to a platform like Kindle. Either way, I refuse to loose access to any more books or magazines I legitimately purchased because I changed reading platforms or the company went out of business.  Yes, Asimov's Science Fiction, I am looking square at you. Look for an upcoming post about DRM in e-publishing soon.

I hope you enjoyed this rambling walk down memory lane and I hope you check out at least one of the magazines I listed above. If not, well, sorry. ;)