The Search for Civilization Continues 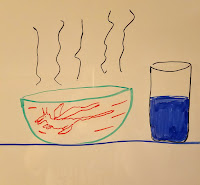 I have been to Subway, Culvers, Panera's, uncountable Chinese restaurants, other sandwich shops, and many more. Most of these seem to think they are making stews out of soup ingredients. I have never had so many thick cream soups that are supposed to be broth soups. Once I did try a cheddar broccoli which was supposed to be a cream soup and it was so thick it could have passed for a chili.

The Chinese soups were mostly nice brothy soups, but usually they were completely lacking flavor. I had one the other day that I had very high hopes for. It was a wonton soup that had pork, shrimp, and chicken in it, as well as noodles, onions, carrots, and mushrooms. Sounds delicious doesn't it? It wasn't. How with that many ingredients can there be almost no flavor at all? Even the broth had very little flavor, it could have been water.


With the inability to find a good soup the search for civilization continues. If you can recommend a good local soup please do.