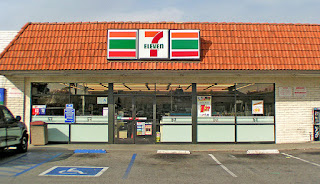 I had planned to write another rant about the decreasingly excellent service available locally, but I decided that I really didn't want this site to turn into a complaint/rant fest. The next time I experience bad customer service I might return to this topic but for today I thought I would take a look back instead.

When I was younger (much younger) the world was a very different place than it is now. While I would hesitate to call it safer and simpler, it was safer and simpler. (I did hesitate, you just didn't notice because I didn't publish it until after the hesitation.)

Maybe we just didn't know everything that could happen or maybe it just didn't happen as much but kids were allowed to be kids. You could go out after school and not check in until dinner and back out after dinner and stay until the streetlights came on. You could play sports in the street (side streets of course, it was a safer time but it wasn't Star Trek.) You could, in short, be a kid.

In those crazy unprotected days (Mom stop reading now...) my friends and I would walk down to the 7-Eleven and hang around. Buy some candy, maybe a pop or two and some comic books. Yes, I was a geek even back then. We had to walk about a a mile and cross what is now a fairly busy street (I would doubt we ever did that at a cross walk.)

7-Eleven was the most important place anywhere when I was a kid. They had everything you could ever want all in one location. Then around 1980 the single greatest thing EVER happened.  The Big Gulp was introduced by 7-Eleven. WOW that was a lot of pop for a really low price and I don't think we ever bought another bottle of pop from 7-Eleven. The place was magical. Now, I'm all grown up, with kids of my own and the magic is gone. I still shop at 7-Eleven once in a while, occasionally even get a Big Gulp (they are on sale right now for about 70 cents.) But it isn't the same. The stores are different, much more, store like. The racks of comics are gone, though I think this is due more to waning interest from "normal" people in comic books now that kids have so many other sources of entertainment than a shift in policy by 7-Eleven. They now have Super Big Gulps, Double Gulps, and Team Gulps, I mean who really needs 64 ounces of pop at one sitting? there is much more fast food and less atmosphere. Though I could be looking with adult eyes at a kids imagination and missing the magic because of it.
It's odd the things that trigger memories, I am not normally good at recalling things from that far back. Most of my childhood and blessedly my high school days are lost in a fog of barely remembered snapshots. Every once in a while though, something such as driving past a 7-Eleven will bring back some mostly forgotten time as if it were yesterday. This post was brought to you by one such event.
Posted by John Tobias at 12:02:00 PM

Email ThisBlogThis!Share to TwitterShare to FacebookShare to Pinterest
Labels: blog