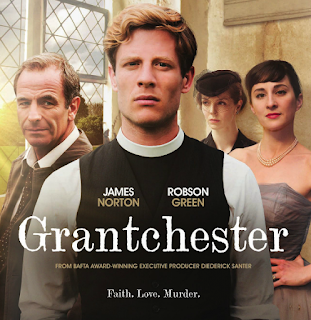 While Bemoaning the loss of a few television series that are coming to an end a friend of mine suggested I give Grantchester a look.

The premise was promising though to be sure the concept isn't entirely original. Pairing a detective with a non-detective is common but there is enough originality to keep it interesting.

The setting is 1950's Cambridgeshire (Grantchester to be exact). Sidney Chambers, an ex Scots Guard and current Vicar aids detective Geordie Keating (also an ex soldier) in solving an astonishing number of murders for both the location and the era. The balance of grouchy detective and hopeful but troubled priest works much better than it sounds like it would. It is refreshing to not have everything solved by DNA, Fingerprints, and Mass Spectrometers.  Think of this show as sort of the anti-N.C.I.S. (Which I also enjoy by the way.)

For a first season show the actors seem to have a natural feel for the characters. Some shows take a season or two to grow into the characters (take Star Trek, The Next Generation for example which didn't find it's feet until unto the second season.)  Can't wait to see how they improve over time.

I have been watching them out of order since they were on episode 5 when I first saw it, and now in re-runs I am trying to catch up. Thing is though, while the larger arcs are certainly confused being out of order it really doesn't lessen the enjoyment of the show.

The story, the acting, and the quality put most of whats on to shame. In the few short weeks I have been watching Grantchester it has become one I am sure to not miss.

I do enjoy British mysteries, always have. I have watched and re-watched every episode of Inspector Morse, A Touch of Frost, Waking the Dead and Red Cap. while it is too early to start comparing it to the likes of Inspector Morse, I hope it continues for many seasons (series).

If you enjoy good mysteries, period dramas or like myself, both you owe yourself a look at Grantchester.
Posted by John Tobias at 6:21:00 PM