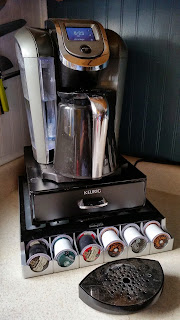 One of the largest complaints I had in my review of the Keurig 2.0 K550 Brewer was the fact that I had to give away a lot of coffee because it wouldn't work in the new brewer.
As I had stated in my review Keurig tried to hide the fact that you had to use official K-Cups in the 2.0 brewer by making a big deal about the brewer being able to scan the cups you put in to automatically brew the perfect cup. Not only doesn't this actually work at all (please see the Review for more information) but only amounts to trying to control the market for K-Cups by ensuring the brewers will only brew K-Cups from companies that have licensed the technology from them. 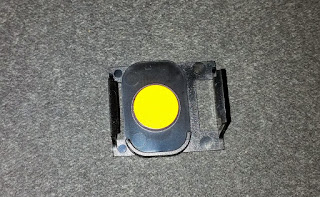 That all changed this week when my wife found and ordered a new product from The Rogers Family Company called the Freedom Clip which frees your Keurig 2.0 from the monopoly of Keurig only coffee. This simple plastic clip, with an orange dot on it is all it takes to defeat the Keurig 2.0 system and the Rogers Family Company will send you a Freedom Clip free of charge and all you have to do is sign up for their newsletter and verify the email address. The idea behind the clip is to fool the sensor into thinking it always sees an official K-Cup regardless of what is inside. It works remarkably well, allowing both 1.0 K-Cups and 1.0 Vue cups to work without any trouble at all. 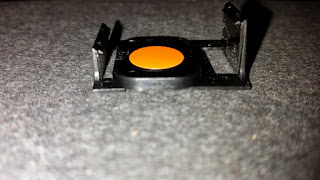 The only trouble I have seen with it at all is that you can no longer use the hot water feature of the Keurig 2.0 because the brewer now always thinks there is a cup inside. Sure, you can remove the clip and put it back on when you want coffee, but in our house this will be an everyday event. I hope the clip holds up to the rigors of this since there is a one per household limit.

I have tried 1.0 Vue cups, 1.0 generic K-Cups and official K-Cups as well as the new 2.0 Carafe Cups and K-Cups with the Freedom Clip installed and everything works like it should. (with the exception of the previous caveat of hot water not working. 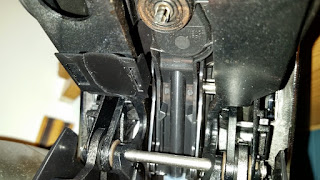 Installation takes seconds, there is a small hole where the sensor looks at the cups and you just clip it over that hole. In this photo it is in the lower left corner of the K550 lid. Removal takes the same few seconds and so far in about 10 removals and re-installs there have been no damage to the clip or the brewer. 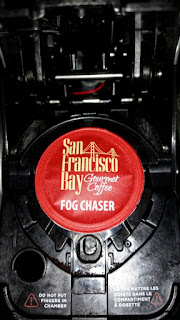 They also send a sample of the coffee they make in the bio-degradable packaging they use. The Rogers Family Company sells the most recyclable K-Cup available at the moment and are working toward a completely recyclable cup.
The coffee they sent me (three K-Cups) was called San Francisco Bay Fog Chaser. It was a good strong brew and I drank all three in one day. Now that I can purchase coffee from them I will certainly do so. Of course, this is certainly part of the reason they are providing the Freedom Clip in the first place, but since they are giving it away with no strings attached I don't see a problem with that. They have taken their mission to free Keurig users a few steps further as well. They are suing Keurig/Green Mountain over the 2.0 Keurig brewing system which is, in part, a result of K/GM loosing court decision after court decision to RFC over K-Cups produced by RFC and others. You can read about the court decisions and the new lawsuit on RFC's website which I link to at the end of this post.
This product removes the only real complaint I had about the Keurig 2.0 brew system and has opened my eyes to a new brand of coffee that I look forward to trying out. I can strongly recommend you get one of these clips as soon as possible and enjoy your favorite coffee regardless of whether or not they license from Keurig.