Devices, Gadgets and Gear, Oh My: The Kindle Fire HD 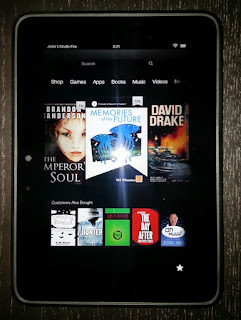 One of the more recent acquisitions for me is the Kindle Fire HD. There are a lot of similarities between the Nexus 7 tablet I wrote about last week and the Kindle Fire HD (KFHD) but they are very different devices with their own strengths and weaknesses.

They are similarly sized though the Kindle is slightly larger in all dimensions and they both use Android as a base OS. You can read books, surf the internet, and email, on both but that is where the similarities end. The Kindle Fire HD was designed from the very beginning to be a media device and not an Android tablet. In fact Amazon has customized Android so much you won't be able to tell that it is Android. The screen on the Kindle is brighter and has better colors making it much easier to read on and much more enjoyable to watch videos on. I even like the form factor better for holding though the KFHD is a little large for a cargo pocket making me still more likely to have the Nexus 7 with me than the Kindle. 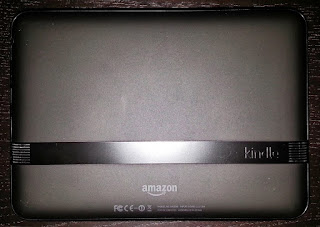 The single largest difference between the KFHD and the Nexus 7 however is in the audio. Amazon was thinking about sound quality when they designed the speakers on it. There are dual driver speakers on opposite sides of the tablet which out volume, out clarity, and generally out perform the Nexus 7. The KFHD is loud enough to be heard throughout the room and won't be stymied by a single hand covering the small speaker slot like the Nexus 7. I can not put into words how loud and clear the sound is on the KFHD. What I can say is it has the best sound of any tablet shaped device I have ever heard. With Amazon instant video, HDMI out, and sound like this, there isn't a competitor to the KFHD for media consumption anywhere.

When it comes to reading books, magazines, and Comics, the size still fails here; less so than with the Nexus 7 because of the better screen. Lets face it the Kindle application on an iPad or even the Nexus 7 is mostly the same as using a KFHD with a few notable exceptions. First, the interface if the Kindle application is better laid out than the carousel of the KFHD. When I am looking to read a book I want to see books not every application, book, magazine, webpage, or document I have used in the last week. You can select Books from the home screen menu and the layout is very similar but that creates an extra step. Basically I just don't like the carousel interface and I would like to see something better take it's place. The second difference between the Kindle application and a hardware Kindle is borrowing which you can only do on an actual Kindle device. Amazon lets you borrow one book from its library every 30 days at no cost and you can keep it until you finish it or return it for a different title. This is a very nice feature that I use all the time and is far more useful than the sample feature for deciding if I want to purchase a book or not.

Applications though are a sore spot with Kindle owners. On Kindles you use the Amazon app store and with Android tablets you use the Google Play store. The Amazon App Store is considerably less well stocked than the Play Store though it is improving all the time. You can access both stores from either type of device though it is much easier on Android than Kindle. If you want to install Kindle purchases on an Android tablet there is an Amazon App store application and from within it you can download and install any compatible Amazon purchased apps. On the other hand you would have to root your Kindle and then hack the Google Play store application onto it which works but isn't for the uninitiated nor the faint of heart.

All in all it is a great device for media consumption and good for playing games. You can get some work done on it, though the interface fights you over efficient use of time. I find myself using the Kindle more for reading and movies and the Nexus 7 more for actual work but if I could only have one it would be the Kindle Fire HD because it does many things great and everything well. If I wanted to drop the iPad too the Kindle Fire HD 8.9" could probably replace all 3 of them though the selection of applications on the iPad is still much better.
Posted by John Tobias at 8:30:00 AM